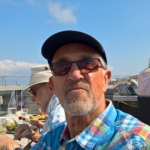 In 2008 my wife and I left Angmering, West Sussex and moved to reside in Brittany. We registered with the French health service and the local GP, who gave us each a good check-up, which in my case included a PSA test with a satisfactory result of 2.5. A year later at the annual checkup my PSA had risen to my age threshold of 4.0, which concerned the French GP. A further PSA test 3 months later resulted in a rise to 9.5 and the GP referred me to a consultant urologist.

The consultant took a TRUS biopsy and at the follow-up appointment explained, in French, how he was going to perform the surgery to remove my prostate. My wife was present and asked him if I had cancer, as he had not even mentioned it! Mais oui!, he replied. Rather dazed we went back to our GP and had a long chat. He said that as my DRE was normal and only 1 in 3 referrals were cancerous, he had not expected the referral to result in a cancer diagnosis. He then, very knowledgably, explained at length in his excellent English the options of surgery or radiotherapy. If I were to have surgery then I could have radiotherapy later if needed, but if I chose radiotherapy then any subsequent surgery became very difficult because of the hardening of the prostate. In May 2010 after a bone scan and an MRI, I had open surgery to remove my prostate. [Pathology on the removed prostate gave a result of pT3a N0 MX, 3+4, with a small focus (0.4% ) of Gleason 8. This was higher than the T2a from the biopsy].

For family reasons we returned to live in Angmering in 2011. When we left France I wrote to the GP thanking him for the care and for finding the cancer. Back with the NHS my postoperative monitoring continued. I also joined PCaSO and began to learn about all the information and support that would have been helpful to me had I known about it earlier! I phoned Prostate Cancer UK specialist nurses and found them very helpful. Several years of PSA results in France/UK at 0 or 0.01 demonstrated the success of the surgery. However by year 4 (in 2014) a slight rise was detected and each successive PSA test showed either a rise or a pause, but the upward trend was clearly discernible. In 2016 when the PSA was at 0.14 the MDT (multidisciplinary team) at Worthing referred my case to the consultant oncologist and he arranged for me to have a whole body PETCT scan. This scan was at the Clinical Imaging Science Centre, University of Sussex, Brighton. I was injected with a Choline F-18 tracer, specific for locating prostate cancer cells. The radioactive tracer was delivered from London by courier in a hazard marked box! I had to wait in a room on my own, monitored by video for an hour, for the tracer to circulate around the body before I had the scan. The whole body scan took about 30 minutes and then there was a further scan just of the pelvic area that took 10 minutes. I had to lie very still on the bed as it moved into the scanner as PET and CT scans are both taken and have to correlate. Once complete I was required to leave the building immediately as one is radioactive for a while! One can eat and drive straight away after the scan.

The oncologist explained the threshold for further treatment, by radiotherapy to the ‘prostate bed’ was a PSA of 0.2, and he was happy to proceed with this as soon as I was ready, as he expected the PSA to continue rising, but I opted to wait for a further result. [I discovered a research paper that suggested there was no extra benefit in ‘ultraearly’ treatment, that the threshold should be two successive PSA results of 0.20 or greater and leaving it beyond 0.5 was detrimental].

My next PSA turned out not to have risen, but stayed at 0.14, but 6 months later it had risen to 0.24. I then agreed to have the radiotherapy, but requested it be at Preston Park as it was accessible for me, had fairly new equipment and a good reputation.

Planning – my planning scan, at the Cancer Centre at the Royal Sussex County Hospital in Brighton, was to allow the team to study my pelvic area and specify the radiotherapy treatment I was to receive, as to the area to be treated and intensity (not just the prostate bed, but also I believe some of the bladder area at a lower intensity).

The work of the team after the scan is quite involved (up to 9 persons in the process, including a physicist and quality assurance), so it is usually about 3 weeks before treatment can commence following the planning scan. 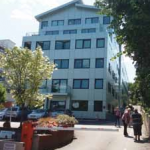 Treatment – The Park Centre at 177, Preston Road, Brighton is opposite Preston Park, a nice green space with a couple of cafés. As well as the Radiotherapy Centre there is also breast cancer care (but not radiotherapy) elsewhere within the building. There is permit parking for those attending the Radiotherapy Centre for treatment. (I mostly took the train to Brighton, then walked). The reception is on the first floor and the treatment suite is on the ground floor, with two Tomotherapy machines designated Tomo 1 and Tomo 2. These differ from the linear accelerator machines used elsewhere. The Tomo machines are used mainly for delivering radiotherapy to the pelvis, such as for prostate, bowel and anal cancers, but I did meet a couple of men who were having treatment for brain tumours on the Tomo machines. Although mostly men were having treatment, there were some ladies having pelvic radiotherapy. There was a good camaraderie in the waiting room and sometimes a sharing of intimate personal details as to treatment and side effects not usual in other social settings! All of the staff were very friendly, considerate and helpful.

Some prostate cancer patients were receiving radiotherapy as primary treatment, usually after a course of hormone therapy, others were having ‘salvage’ radiotherapy like myself, without hormone therapy. What struck me was how different each radiotherapy patient’s treatment regime was, very personalised for their particular case and cancer, yet we were all processed through the Tomo machines with about an 18 minute interval between patients for each machine, with no delay due to set-up for each individual’s treatment plan.

I had to arrive one hour before the treatment time allocated on my schedule (which was usually 13.42pm, Monday to Friday), use a micro-enema (to clear the back passage), drink four cups of water (500 ml) within 5 minutes, then wait 40 minutes to the treatment time. I had to be aware of any delays occurring to ‘Tomo 2’ I was on and adjust the start of my drinking accordingly. One needs a comfortably full bladder for the treatment, so the 40-minutes was optimum for this, I found it ok. 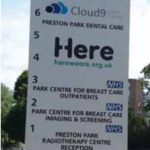 Downstairs as I was called into the treatment room they checked my identity and I could see my photo and details on the monitor screen. I had to lie on the treatment couch and two radiologists aligned my position so that red lasers lined up with the three tiny tattoos on pelvis and hips that I had been given at the time of the planning scan. They left the room, the large door closed and the couch moved into the ‘donut’ of the machine. The machine took a scan and then the couch moved out again, there was a wait whilst outside they checked the scan, slice by slice, to ensure that everything complied with the plan. Once satisfied the radiologists sent the couch back into the Tomo machine and the radiotherapy took place (about 2 to 3 minutes of treatment in my case, 2 Grays per day).

I was scheduled to have 33 ‘fractions’ of radiotherapy, but after about a week the consultant reduced this to 30 fractions (60 Gy) to reduce the risk of bowel damage, as often a loop of my bowel could be seen on the daily scan as being in the higherintensity area being radiated.

I did not experience any significant problems during the treatment period of about 6 weeks, but some minor problems followed, peaking about two weeks after treatment. A PSA test at 3-weeks after treatment showed a reduction to 0.06 (down from the previous 0.24). The consultant was very pleased and I will have another PSA test and appointment in December 2017.

In conclusion – before we moved to France in 2008 there were no PSA checks through the NHS, I did not know PCaSO existed or even where my prostate was or what it did!

I have been very satisfied with my prostate cancer treatment on the NHS and in France. I remain grateful to my GP in Brittany. If we had not moved to France then prostate cancer may not have been discovered until I had symptoms, too late for curative treatments